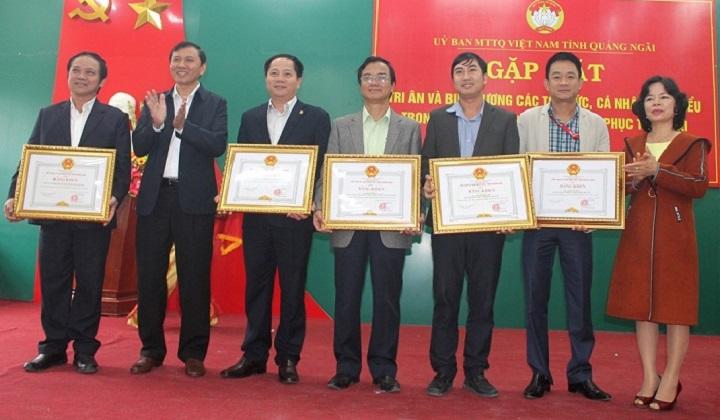 In the morning of January 19, 2018, the Provincial Vietnam Fatherland Front Committee organized a meeting to express gratitude and praised typical organizations and individuals in rescue work to overcome natural disasters in 2016 and 2017. PTSC Quang Ngai is one of the businesses praised at the ceremony for its many contributions in disaster rescue and repair activities in the provincial.

At the ceremony, the Organizing Committee awarded the Certificate of Merit of the Chairman of Provincial People’s Committee to the PTSC Quang Ngai collective and Mr. Pham Van Hung – Director of Company who have made many contributions in the rescue activities in Quang Ngai provincial area. For 02 consecutive years of 2016 and 2017, PTSC Quang Ngai has joined hands to contribute many meaningful programs such as: Supporting the fund for the poor of Quang Ngai, clean drinking water, handing food to people in flooded areas, supporting instant noodles, drinking water, rice and necessary necessities to promptly deliver goods to help people in seriously flooded areas, helping them overcome difficulties and stabilize their lives. The total value of supporting programs was nearly VND 1 billion.