Trang chủ » News » The Conference to summarize the Party’s work, production and business activities, Trade Union work in 2016 and the Labor Conference in 2017 of PTSC Quang Ngai

The Conference to summarize the Party’s work, production and business activities, Trade Union work in 2016 and the Labor Conference in 2017 of PTSC Quang Ngai

In the afternoon of January 9, 2017 at the Office Hall, PTSC Quang Ngai successfully organized the Conference to summarize the Party’s work, production and business activities, Trade Union work in 2016 and the Labor Conference in 2017. Attending the Conference, there were the presence of:

Mr. Thai Quoc Hiep – Member of the PVN’s Party Standing Committee, Secretary of the Party Committee, Chairman of Board of Management of PTSC;

Mr. Nguyen Tran Toan – Member of Executive Committee of the PTSC’s Party Committee, Vice President of Board of Directors, Chairman of Trade Union of the Corporation, Chairman of the Board of Management of PTSC Quang Ngai;

At the conference, Mr. Pham Van Hung – Director of the Company reported the business results of the Company in 2016: It can be said that 2016 was a difficult year for the world economy, Vietnamese economy in general and PVN, PTSC in particular. The low oil price has greatly affected PTSC Quang Ngai. All employees in the Company have been enthusiastic in labor, creative work, fully responsibility and especially successfully completed the 2016 targets assigned by the Corporation. Specifically, in 2016, PTSC Quang Ngai has completed the set targets, revenue reached VND 904 billion, exceeding 12.92% compared to the plan, profit reached VND 50.12 billion, exceeding 25.30%. 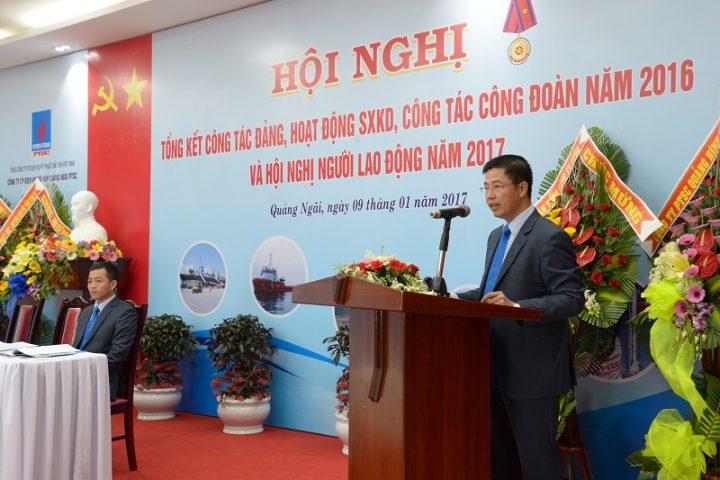 In order to meet the needs of traditional customers in a timely manner, at the same time to retain Japanese customers, attract new customers and improve competitiveness as well as serve the Long Phu Project, in the past year, PTSC Quang Ngai has invested and upgrade Port No. 1 from 50,000 DWT to 70,000 DWT, anticipating major upcoming projects such as: upgrading and expanding Dung Quat Refinery, Long Son Petrochemical Complex, Blue Whale gas field … In 2016, the Company always maintained the effectiveness and efficiency in SKATMTCL system according to ISO 9001: 2008, ISO 14001: 2004, OHSAS 18001: 2007. In 2016, the Company also achieved some results such as: there were 706 initiatives at the Company level, 81 initiatives at the Corporation level including 1 initiative with A prize and 01 initiative with B prize awarded. All of initiatives are highly appreciated by the Corporation and PTSC Quang Ngai is continuing to strengthen its scientific research committee.

Mr. Pham Van Hung – Director of the Company emphasized: It can be said that the achievements and milestones achieved in 2016 have shown the spirit of solidarity, consensus and the best efforts of the whole employees in the Company, at the same time, they also showed the interest, created favorable conditions as well as the drastically and effectively direction at all levels of the Corporation’s Leadership. With targets set out in 2017, to develop our Company in the direction of “Sustainable, strong and fast development” in the coming time, every employee and the collective of PTSC Quang Ngai must continue to try, make dedication and solidarity. The working spirit of all employees always towards higher, more comprehensive goals in the direction of “Solidarity – Dynamism – Innovation – Professionalism – Compassion”. I believe that each employee, together with the collective of Company and the leaders of the Corporation, will join hands to solve and build the common roof of PTSC Quang Ngai increasingly beautiful, stronger day by day.

At the Conference, Mr. Huynh Ngoc Thanh – Chairman of Trade Union of the Company reported Union activities, the situation of implementing the regimes and policies for employees. PTSC Quang Ngai has purchased 100% of social insurance, health insurance, unemployment insurance, human insurance for employees, labor protection regime in accordance with the current regulations of the Corporation, the Company and the State law. The average income per capita in 2016 is VND 12.6 million / month, reaching 122.8% of the plan in 2016 (VND 10.26 million) and equal to 111.5% compared to 2015 ( VND 11.3 million). Regarding social welfare, the Company regularly visits and encourages employees with difficult circumstances, taking care of the lives of employees, especially workers in extremely difficult circumstances, dangerous diseases … 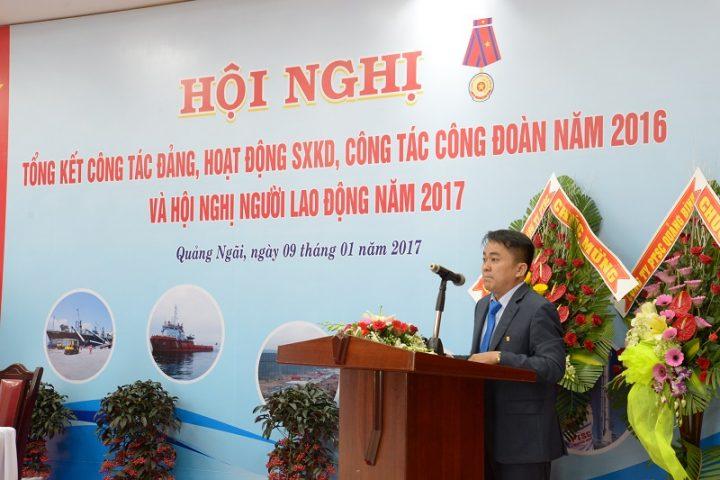 Speaking at the Conference, Mr. Nguyen Tran Toan on behalf of PTSC acknowledged the efforts and achievements achieved in 2016 of PTSC Quang Ngai, trusted the leaders and employees of PTSC Quang Ngai with a long tradition of solidarity would continue coordination, support, assistance and sharing with each other in the spirit of initiative, responsibility, openness and sincerity; continue learning to improve management skills, professional skills, and foreign languages ​​to build a corporate culture of PTSC characteristics – taking the soul, mind, strength and energy as a foundation and continue to be confident to overcome themselves, to complete the work well, to win, to succeed, to develop a fast, strong and sustainable PTSC Quang Ngai in 2017 and the following years. 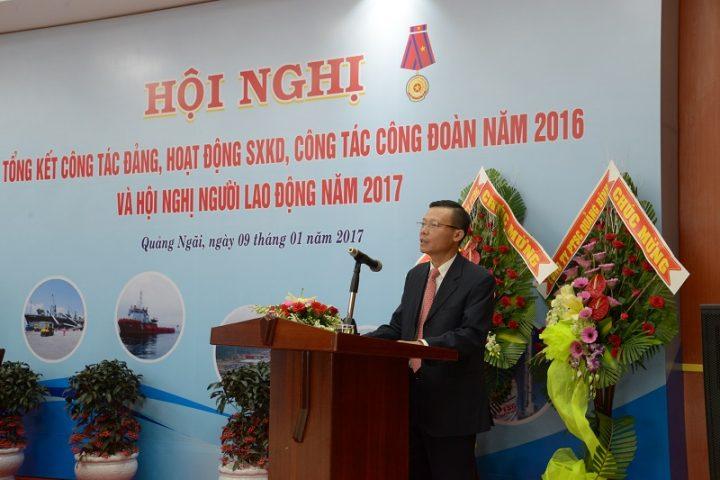 Also in this conference, leaders and Trade Union of PTSC Quang Ngai representatives of the departments launched and signed an emulation commitment in 2017 and praised the collective members and individuals for achieving outstanding achievements in the labor emulation movements produced in 2016. 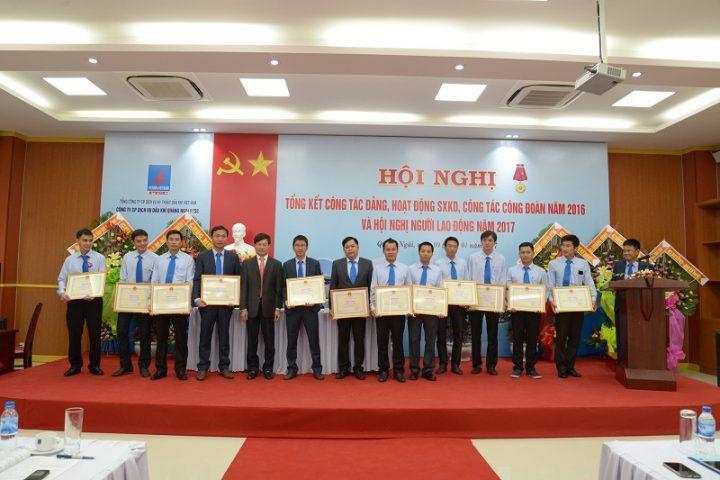 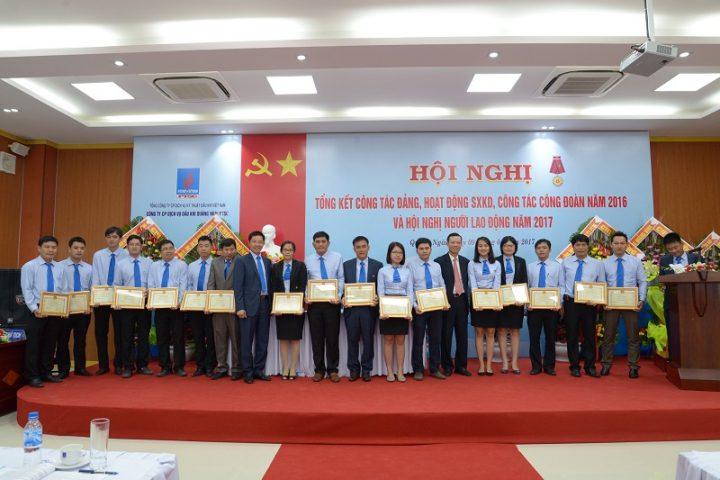