On the occasion of Dinh Dau New Year 2017, in the afternoon of February 6, 2017 at the Office Hall of the PTSC Quang Ngai, Mr. Thai Quoc Hiep – Member of the PVN’s Party Standing Committee, Secretary of the Party Committee, Chairman of Board of Management of PTSC visited and wished a Happy New Year to all officers, employees of PTSC Quang Ngai.

Welcoming Mr. Thai Quoc Hiep, Secretary of the Party Committee, Chairman of Board of Management of PTSC and Mr. Nguyen Xuan Cuong, Vice President of PTSC’s Board of Directors were Mr. Pham Van Hung – Director of PTSC Quang Ngai; leaders of departments and employees representing nearly 1,200 employees of the whole Company.

Reporting to the Corporation’s Leader, Director of PTSC Quang Ngai, Mr. Pham Van Hung said: 2016 was a difficult year for the world economy, Vietnam economy in general and PVN, PTSC in particular. The low oil price has greatly affected PTSC Quang Ngai. However, with the attention, help and drastic direction of the Corporation, along with solidarity, close coordination, a determination for the sustainable development of the company, all employees in the Company have been enthusiastic in labor, creative work, full responsibility and especially always want to work, be devoted, built PTSC Quang Ngai in particular, and PTSC in general more and more developed and successfully completed the 2016 targets assigned by the Corporation. Specifically, in 2016, PTSC Quang Ngai has completed the set targets, revenue reached VND 904 billion, exceeded 12.92% compared to the plan, profit reached VND 50.12 billion, exceeded 25.30%, The average income of employees is 12.6 million VND / month, creating jobs for more than 1,200 workers. At the same time, PTSC Quang Ngai committed to continue promoting the achieved results, solidarity, efforts to strive with the highest determination, to find the best solutions to successfully accomplish the mission in 2017. 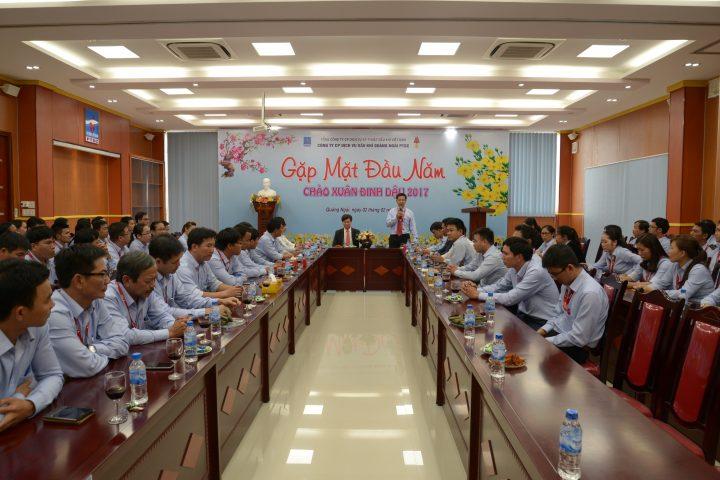 On behalf of the Corporation’s leaders, Mr. Thai Quoc Hiep – Member of the PVN’s Party Standing Committee, Secretary of the Party Committee, Chairman of Board of Management of PTSC sent to the leadership and all employees of PTSC Quang Ngai and their families a Dinh Dau New Year 2017 with health, happiness, wellbeing and prosperity. Speaking at the meeting, Mr. Thai Quoc Hiep praised PTSC Quang Ngai’s spirit of creative initiative and difficult overcoming in the past time, acknowledged and highly appreciated the contributions of leadership and employees of PTSC Quang Ngai who have successfully completed the tasks of 2016. Believing that in the New Year, PTSC Quang Ngai will have more strides and develop more in its production and business activities, close contribute to the overall development of the Corporation. He wished PTSC Quang Ngai would continue to have solid and effective steps. 2017 will be the opening year of many new victories for PTSC Quang Ngai. 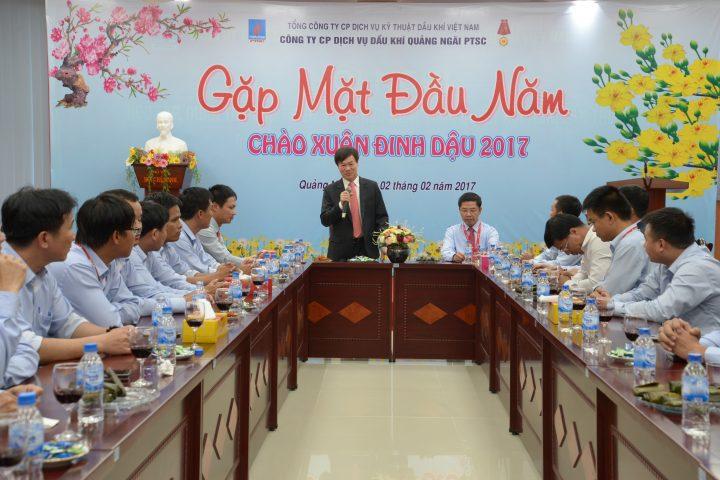 Earlier, in the afternoon of February 2, 2017, PTSC Quang Ngai also held a meeting and congratulated the Dinh Dau New Year 2017. Attending the meeting were Mr. Pham Van Hung – Director of the Company, the Board of Director, Heads and Deputy Heads of Divisions and numerous employees of the Company.

At the meeting, Mr. Pham Van Hung – Director of the Company congratulated the New Year to all employees. In reality, 2016 was a difficult and challenging year, but by the tireless efforts of all employees, the Company has achieved excellent business results. Mr. Pham Van Hung – Director of the Company believes that in 2017, the whole Board of Directors and employees of PTSC Quang Ngai will continue to unite, agree and overcome all challenges to successfully complete the tasks set out; together building a special culture of PTSC; taking the soul, mind, strength, energies as the foundation and continuously being confident to overcome ourselves, to complete the work well, to win, to be successful, to develop a fast, strong and sustainable PTSC Quang Ngai in 2017 as well as the following years. 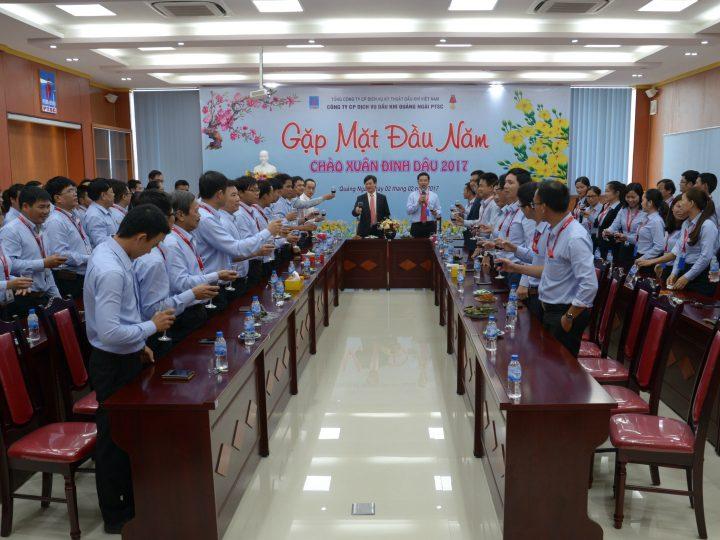 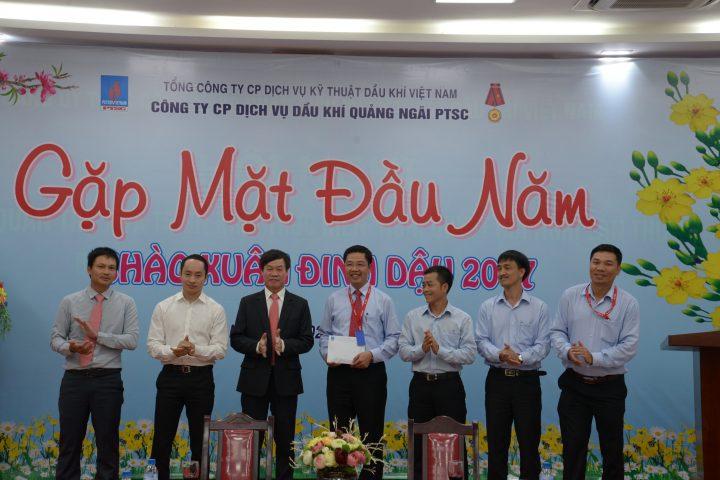 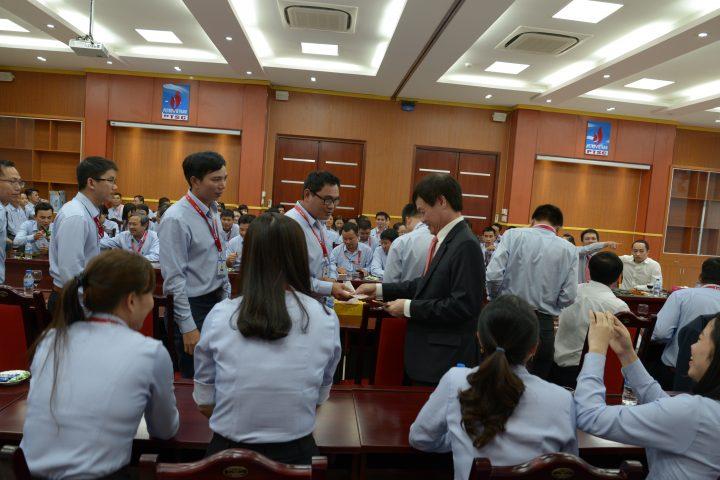 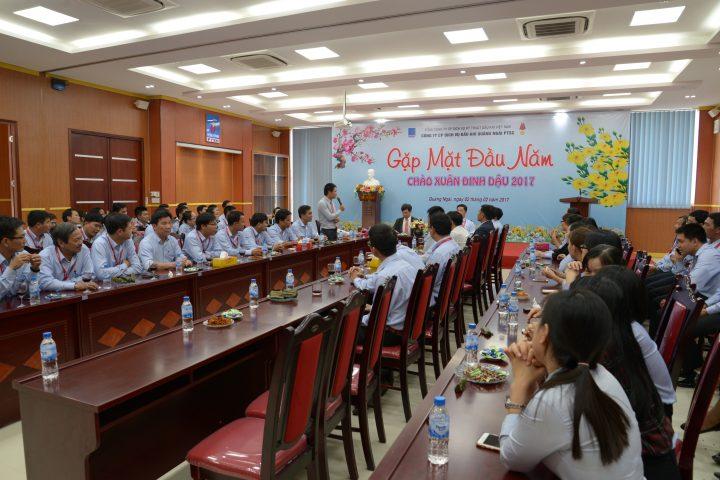